Neal Elias was, undoubtedly, a 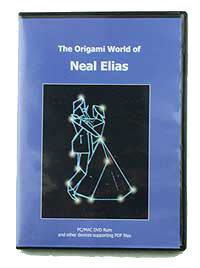 paperfolding genius. He evolved a technique known today as box pleating and produced an amazing number of origami creations exploring and evolving the technique. Folds such as ‘The Last Waltz’, ‘The Moment of Truth’, ‘Elephant’, ‘Buddha Shrine’, ‘Segovia’ and many of his 3D busts are a joy to fold stand out as being all time classics. Contained on a DVD ROM are diagrams for Neal Elias’s complete documented work including never before seen sketches for his incomplete works.

Neal was included in a circle of paperfolders from across the world who exchanged models ideas during the 1950s and 60s. To preserve the models he documented those he received along with his own creations in crude notebooks. Intended to be only a personal reminder to help him reproduce the models he unwittingly compiled a unique record of the early western development of origami as well as folding instructions for his own models.

The notebooks have been painstakingly reproduced, are fully indexed and are complemented by illustrations, photographs and diagrams by other artists. Extensive use of hyperlinks throughout make navigation simple and there is a full thumbnail index. Also included are essays, memories and tributes from David Lister, Robert Lang, Dave Brill, Dave Venables and others, along with over two hours of video and audio recorded by Neal before his passing in 2005.

This is almost certainly the most complete reference for any paperfolder ever compiled with 1530 pages contained on a DVD Rom in PDF format. The DVD has been used to allow sufficient space for the massive amount of content, please note it does not offer a typical DVD interface. Each copy is uniquely watermarked for security.

Dave Venables, Marcus Cooman and others have collaborated over 25 years to assemble this massive work on a not for profit basis.

Rest of the world