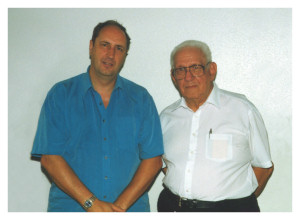 attended one of the first Birmingham mini meetings in Mick Guys loft, brimming with tales from America. Strange as it may seem now, there was a certain mystique about distant shores such as America. The British package holiday had only been established a few years earlier and was mainly centred on Europe. I was fascinated with all things American, the food (McDonalds was yet to arrive over here), the massive gas guzzling cars, drive in movies, Superman comic books, and the origami oh, the origami which technically outshone most other western origami of the day.

I remember it as if it were yesterday. Joan had recently visited the USA on a business trip and met with origami stars Fred Rohm, Pat Crawford, Sam Randlett, Lillian Oppenheimer, and Neal Elias amongst others. Many of the models she returned with were unlike anything I had seen up until that time – Pat Crawfords Grand Piano and Rigged Sailing Ship, Neal Eliass Last Waltz, Elephant, Bull and a 3D bust. Joan reverse engineered the Bull and taught it at the meeting. So taken with the model was I that I decided to try my hand at diagramming madness – who in their right mind would choose to diagram something so complicated for their first attempt!

Quite pleased with the results (not so pleased as to prevent me re-diagramming it again some years later) I dispatched a copy to Neal who immediately replied with a warm letter of thanks and encouragement and a model To Calvary (Christ bearing a cross). So began a long friendship spanning 32 years. I discovered that Neal was born in 1921 in Cleveland Ohio and married to Betty with two grown up daughters, Louise and June and one grandchild at the time Alan. I learned of his love of magic and how he met Betty, the only daughter of a magic shop proprietor through his frequent visits to the shop and of their marriage over 50 years ago on 6th March on Neals birthday. Neal frequently joked that marrying Betty ensured a continuing good discount on magic items.

As the years rolled on I shared in his enjoyment of more grandchildren, Michelle, Amy, Beth and Nicole and even two great grand children. I admired his incredible skill across a broad range of hobbies and handicrafts including rug making, cross-stitch, bonsai growing, painting of plaster cast figures (many of which provided inspiration for origami, most notably his Buddhas and elephants). He was an avid reader and loved historical novels especially those relating to the myths and legends of King Arthur such as the series by Mary Stuart and murder mystery books such as Ruth Rendalls thrillers. He played classical guitar and had a massive collection of classical and non vocal music. Beethoven and especially Mozart were his favourites and before he was forced to thin his (33 rpm vinyl) collection prior to his final house move, he boasted a complete collection of all their works. I am proud to have introduced Neal to some modern music Mike Oldfield, Tangerine Dream, Philip Glass to name but a few. His only rule was no vocals! Neal did not smoke or drink but when we first met did use chewing tobacco a habit which he kicked in the early 80s. Although occasionally he would wear coloured clothes he would normally be seen in black trousers and a white shirt and never left the house without a (plain) tie. I mention the small matter of Neals clothing only because it typified the man never extravagant, extrovert, and if he could, he would prefer to be in the background.

Origami had come to Neals attention in 1951 via one of Houdinis books on magic Paper Magic and in his search for more paper folding he found Murray and Rigneys book Fun with Paperfolding and Origami (1928) the following year. The book made mention of Gershon Legman – a name Neal had come across in the context of erotic collections – and he wrote to Legman in 1953. Legman replied enthusiastically and they corresponded for a short period with Legman sending the occasional model. Importantly, Legman passed on Lillian Oppenheimers address. In turn Lillian passed on the addresses of other paper folders including Sam Randlett, Baggi, Bob Neale and Robert Harbin. Neal wrote to them all and so began the start of a network of paper folders soon to include Fred Rohm.

Neal had surprisingly few origami books partly because they were few and far between in the 50s and 60s. Ligia Montoya sent Neal quite a few Spanish books which he passed onto me along with some German ones which I dont know where they came from. The rest of his collection apart from the ones mentioned above were gifted and featured his work.

In around 1960 Neal began to document the origami models he was receiving, with the earliest models dating back to 1953. The notation is closely based on Yoshizawa and not that depicted in Murray and Rigneys books. The illustrative style evolves and matures over the next 20 years. Neal was a good artist and his illustrations were rarely inaccurate or incomplete. As early as model number 10, Camel by John Nordquist, economies are made by recording more than one move per diagram. The notebooks are not elaborately bound volumes but simple lined school books with the illustrations in pencil. The first 10 volumes contain 847 models and are in the care of the British Origami Society. After this, Neal switched format and used loose leaf plain paper in ring binders. Diagram for model 916, Horse and Cart by Neal, dated September 1967 is a landmark as we see the first use of squared paper and a switch from conventional notation to the use of dashes to depict mountain folds and dots to depict valley folds. The model is the first to use box pleating (or square folding as Neal called it) and was inspired following seeing Emmanuel Moosers Train (diagrammed at 901). At 902 is a truck credited to Mooser and Elias with a hybrid of the old and new notation and is the train engine modified into a truck. The final diagrams are dated 1971 drawn in 1978 – with the last numbered 1161. The original final 314 illustrations are in the safekeeping of Sam Randlett and we both have copies of each other’s.

Our correspondence went up a gear when we began exchanging cassette tapes in 1981, a method of correspondence he had found convenient with Fred Rohm and suggested we should try. This coincided with us both buying a home computer. The ZX81 was the first affordable computer as far as we were concerned and we both brought one unbeknown to each other at launch. We soon learned the examples of BASIC programming given in the manual and looked to each other for inspiration as to what to do with our new found Toys. This generation of computers used cassette tapes to store programs, which suited us down to the ground. On side one of a tape we chatted and on side two recorded programs. Neal kicked the ball off with a card-shuffling programme, which I returned back (improved). Neal enthused to Fred Rohm who also brought a ZX81. Fred wrote a routine for 3 card Monte which between the three of us we refined into a nice little program. Our love of those early computers led to our most intensive period of correspondence with sometimes three C90 tapes per week. Computers remained central to our correspondence as did the use of voice cassette tapes. I have never thrown one away and hope one day (when I am retired) to gather them all together (maybe as many as 250) and edit them for the origami content.

Neal always considered work a necessary evil and would have much preferred pursuing his hobbies full time. He was generally unambitious and worked all his life for the North Western Railroad as an office clerk rising to supervisor in the payroll department. He was thrilled to be offered redundancy in 1984 and immediately made plans for he and Betty to visit England. A week in London and a week with my wife and I was, we all believed a once in a lifetime opportunity to meet our good friends. London was everything Neal expected and Betty loved it. Stage shows, sights, heritage, history. Very apprehensively, Neal agreed to attend a mini convention which we held at the Cobden Hotel Birmingham. A video of this has mysteriously turned up I cant recall anyone filming the event. Neal was too nervous to teach so a number of us taught his models with Neal adding commentary and history.

Two years later we had a family holiday in the USA and enjoyed a week with Neal and Betty at their new home in Parma Heights. They had moved that year from their marital home in Brunswick to a small two bedroom apartment for practical reasons. We had a wonderful week and were treated like royalty enjoying meeting June, Louise and families and a whole bunch of home computer enthusiasts Neal had met up with.

We met with Neal either in the UK or the USA about each two years over the next 20 years and the last time we met up was in Florida in 2002. They moved to a new home in around 1997 on a warden estate in Strongsville where they were extremely happy. We visited there in 2000 and I was surprised to be given some boxes of models. I had not thought Neal had any examples of his work left as his habit was to make a small number of each fold and give them away to paper folders and other friends whose initials appear at the bottom of the diagrams. Neal explained that he had come across them during the house move and they were the last he had no more. These are now in the possession of the British Origami Society. He was very proud of the BOS booklets particularly no.10, Neal Elias Selected Works 1964- 1973 (originally published as Focus on Neal Elias which I illustrated in 1978. He had one other publication At the Table a magic booklet describing and illustrating 14 card illusions (using very difficult sleight of hand) dated January 1946.

Neal met with only a few paperfolders and apart from the mini convention mentioned earlier did not attend any origami gatherings. He met with Sam Randlett and Fred Rohm at their homes. Joan Homewood, John Smith, and Mick Guy visited from the UK and he was particularly pleased to meet Robert Lang whom he met a few years ago.

A stroke in 1986 had always worried Neal and although it left him with no serious disabilities he was frustrated at not being able to be as dexterous as he was previously and he felt his concentration span was diminished and his patience short.

We spoke on the phone while I was in Florida in September 2005. He had a series of minor strokes and had been diagnosed as having the early stages of Altzimers disease. He was not himself and spoke only for a short time. He passed away 2 weeks later following a further stroke.

I am sad at Neal’s passing. He was much more than a friend to me a mix between a father figure and a hero. His origami and magic legacy will be enjoyed for years to come – of that I have no doubt. He was a landmark figure in the origami world and our thanks go to him for not only his personal contribution but for the wonderful records he made of origami development in the 60s and 70s through his notebooks.